Helping the People of Lebanon 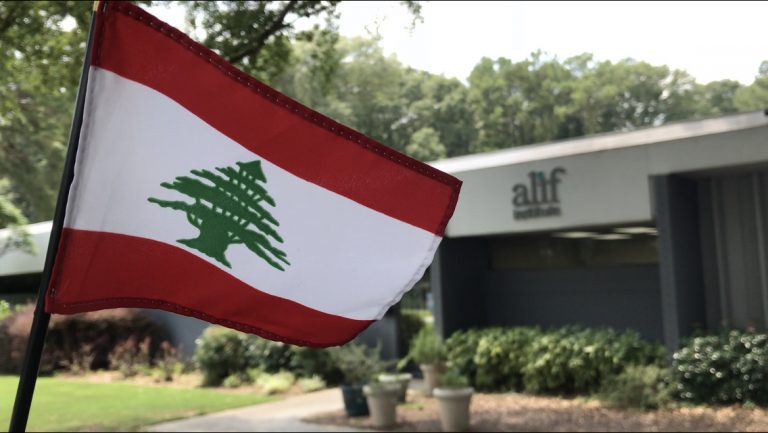 To Beirut from Atlanta, with Love

On Sunday, August 9, the Atlanta community gathered at Alif Institute for a vigil to share their grief, support, and love for the Lebanese people whose lives were devastated by the blast that occurred on August 4, 2020. A steady stream of people filed in and out all day, lighting candles, placing flowers and art, and writing their wishes for the victims of this latest disaster.

Lebanese and non-Lebanese alike were shaken by the images of the devastation and suffering caused by the blast but also inspired by the resilience and spirit of the Beiruti people. Since there is no official central place for Atlanta’s Lebanese community to gather, Alif Institute offered the use of its facilities, so that people could express their strong desire to process this tragedy together, albeit in a socially-distanced setting, rather than in total isolation compounded by the current pandemic.

The vigil opened with a few words from Alif’s Interim Director, Alta Schwartz, who noted the strong ties between Atlanta and Beirut. She referenced the statement of the Lebanese Honorary Consul, Mr. Wassim Hojeij:

“Lebanon and its people possess a formidable spirit. While Beirut was shaken to its core, the blast has reverberated around the world…Like Atlanta, Beirut is a phoenix. I know that Beirut will thrive again.”

Born and raised in Beirut, Alif board member Teresa Abboud El Rassi prepared some comments expressing her grief and her hope for the people of Beirut.

“Beirut, one of the oldest cities in the world, was always the emblem of culture, love, and freedom…today Beirut is crying and we are all here to show the grief and loss. Injustice is part of this world and justice is what drives to rise, gather, act, and donate to always try to make things right.”

The vigil was co-sponsored by the AUB Alumni Atlanta Chapter, ADC Atlanta Chapter, and the Tripoli Association of Atlanta. Our friends at Refuge Coffee also supported our efforts by publicizing the event and bringing their coffee truck to Alif. Channel 2 Action News and The Atlanta Journal and Constitution covered the event.

Mrs. El Rassi, also a local artist, offered some of her artwork for sale, with all proceeds going to support relief efforts in Beirut. Also, Alif collected $700 in donations to be given to organizations from a list of trustworthy charities that have local operations in Beirut and are directly helping blast survivors. The level of devastation is immense and the need is ongoing. If you would like to donate to help the people of Beirut rebuild, please see below for a list of some of the most trusted organizations.

Lebanese non-profit organizations that have a 501-C-3 Status

Lebanese Non-Profit Organizations Based in Lebanon Only