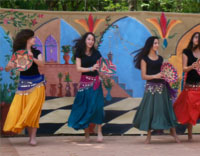 Alif Institute is an non-profit American education, culture, arts, and enrichment center with a focus on the Arab culture and Arab Americans. Since 2004, the Alif Institute has been offering Arabic language courses, lectures, workshops, art exhibits, film festivals and other cultural programs showcasing the Arab and Arab American heritage to the public.

The Children and Youth Group of the Alif Institute will be presenting some modern and traditional Arabic dances. Among the traditional dances they will include the “Dabke”, a folk dance popular in many countries in the Arab World. “Dabke” means “stomping of the feet” in Arabic; it is danced in lines with different steps and rhythms. It is often performed at weddings and parties in different areas of the Middle East primarily in Iraq, Palestine, Lebanon, Syria and Jordan where it originated.