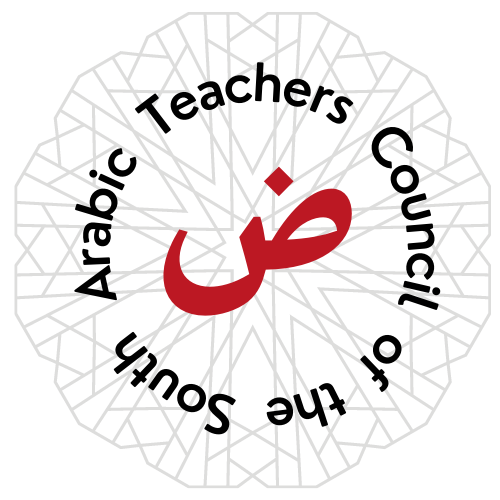 The Arabic Teachers Council of the South is an umbrella organization for K16 Arabic teachers and stakeholders interested in Arabic language and culture. Our mission is to strengthen the capacity of Arabic educators, build community, expand programming, and pave new paths for 21st century Arabic assessment, curriculum, experiential learning, and pedagogy.

How does the Arabic Teachers Council of the South support Arabic teachers? ​

The ATCS is a community of educators from K12 schools, universities, and organizations in the southern U.S. states who are engaged in the instruction of the Arabic language, its dialects, and its multi-faceted cultures. The ATCS offers a community of support for these educators, provides professional development opportunities, and hosts cultural events.

For example, the ATCS organized and provided one online ACTFL Oral Proficiency Interview (OPI) Workshop in Winter 2021 and another in Summer 2021. Federally-funded scholarships, such as the Critical Language Scholarship and the Boren Award, utilize the ACTFL Oral Proficiency Interview (OPI) to measure student and program success. In addition, the ACTFL OPI is recommended as a standard assessment tool for college credit by the American Council on Education (ACE) and is accepted in all 37 states that participate in the Seal of Biliteracy initiative.

A total of 25 Arabic instructors from the southern U.S. and beyond were able to attend the trainings free of charge. Dr. Ghazi Abuhakema, Certified ACTFL OPI Trainer and Professor at the College of Charleston in South Carolina, facilitated the trainings. By offering these workshops, the ATCS has elevated the capacity of its Arabic language instructors by introducing them to the ACTFL rating scale, the structure of the Oral Proficiency Interview (OPI), and techniques of administering and rating the OPI, including applications in the language classroom. Participants observed and conducted live practice interviews across all proficiency levels (Novice through Superior). The trainings not only provided participants the resources and confidence to assess students using researched methods, it also introduced them to a cohort of supportive Arabic instructors and a community of practice.

The online workshops fulfilled the first half of the ACTFL training required for OPI tester certification. Many of the participants plan to receive the second half of the training to become ACTFL Certified OPI Testers.

Why do we need an Arabic Teachers Council of the South?

The importance of Arabic in today’s world is uncontested among educators who understand that language is the gateway to understanding cultures and societies. Language proficiency and intercultural competence can lead to careers that are inaccessible to mono-linguals. Students who graduate with proficiency in Arabic, a language designated as “critical” by the federal government, will find careers in government, commerce, defense, foreign policy, conflict resolution, diplomacy, global health care, communication, education, and more.

According to the Pew Research Center, the number of Americans aged 5 and older who speak Arabic at home grew by 29% between 2010 and 2014 to 1.1 million, making it the seventh most commonly spoken non-English language in the U.S. Nearly 18% of U.S. Arabic speakers reside in the southern U.S., according to some estimates. In addition, the southern U.S. frequently benefits from expanded trade with the Middle East and North Africa. As relationships with the Arabic-speaking world and local Arabic-speaking communities continue to grow in importance in the southern United States, so will the demand for linguistic and cultural competence in Arabic.

To keep up with the growing demand, K-12 schools, colleges, and universities must provide high-quality and engaging Arabic language and culture programming. In order to do so, these institutions must train, hire, and support qualified instructors of Arabic. A 2017 report from the American Academy of Arts and Sciences reports that “one of the biggest obstacles to improved language learning is a national shortage of qualified teachers.”

The ATCS is funded by Qatar Foundation International and hosted by the Atlanta Global Studies Center (AGSC). It partners with the Georgia Arabic Teachers Association (GATA), Alif Institute, and the Georgia Department of Education (GA DOE) World Languages and Workforce Initiatives. The ATCS is an umbrella organization for K16 Arabic teachers and stakeholders interested in Arabic language and culture. Membership in the ATCS is open to any Arabic teacher in the Southern U.S. and includes educators from schools in Georgia, North Carolina, South Carolina, Tennessee, Kentucky, Florida, Texas, Louisiana, Alabama, Mississippi, Oklahoma (pending), and Arkansas (pending).

A website for members of the ATCS is under construction. To join, please contact the ATCS Community Liaison, Awad Awad.

Support for the Arabic Teachers Council of the South

The establishment of the ATCS was made possible through support and funding from Qatar Foundation International (QFI). QFI engages a diverse, global community of learners and educators, fostering cross-cultural connections through the exploration of the Arabic language and the Arab world’s histories, cultures, and peoples in student-centered learning environments. QFI is headquartered in Washington, DC, and is a member of Qatar Foundation (QF). To learn more about QFI please visit: www.qfi.org/opportunities/arabic-teacher-councils/